To demonstrate its extreme-heat protection qualities, AMSOIL 20W-50 Synthetic Motorcycle Oil (MCV) was subjected to a dynamometer test designed to... 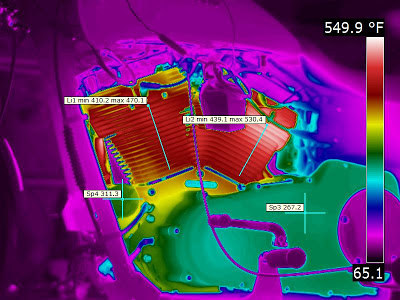 To demonstrate its extreme-heat protection qualities, AMSOIL 20W-50 Synthetic Motorcycle Oil (MCV) was subjected to a dynamometer test designed to simulate conditions even more extreme than the demanding stop-and-go driving conditions of a motorcycle rally or parade route.
A 2012 Harley-Davidson FXDB Dyna Street Bob motorcycle equipped with AMSOIL 20W-50 Synthetic Motorcycle Oil was operated for 68.5 minutes at low speeds, with significant idle time broken by engine revving and little to no air moving across the cylinders. Like most Harley-Davidson motorcycles, the Dyna Street Bob features an air-cooled V-twin engine, which relies on cooling fins arrayed along the cylinder walls to conduct heat away. To create the most-severe operating conditions possible, the electronic temperature controls, which safeguard the motorcycle when temperatures reach dangerous levels, were deactivated. The test subjected the oil and engine components to intense heat not normally experienced in the real world, with cylinder temperatures reaching more than 500°F.
The extreme temperatures were no match for AMSOIL Synthetic Motorcycle Oil. After nearly 70 minutes of torturous testing and heat exposure, oil analysis revealed no change in oil viscosity and only minor levels of oxidation, TBN depletion and wear.
See the March AMSOIL Magazine or www.amsoil.com/runcool for more information.

When the pandemic lockdowns took effect across the U.S. and Canada two years ago, no one knew how the situation…

The New Dealer Zone is Live

The new Dealer Zone is live. Be sure to log in, explore its contents and become familiar with it. It’s…

How Dealers Can Make Money Under The Next 50 Compensation Plan

In the February AMSOIL Magazine, we unveiled The Next 50 compensation plan, which will take effect later this year. We…

The Next 50 Compensation Plan Virtual Meetings

We are hosting a series of virtual meetings to go over The Next 50 compensation plan. Each meeting will review…

Is it difficult to find the motivation to make a sales call? Is your best commercial account’s product on back…

Effective April 1, WIX has implemented an average 6% price increase on its filters due to increased raw-material costs.

We have been made aware of several attempts by scam artists to target AMSOIL Dealers while posing as legitimate companies,…